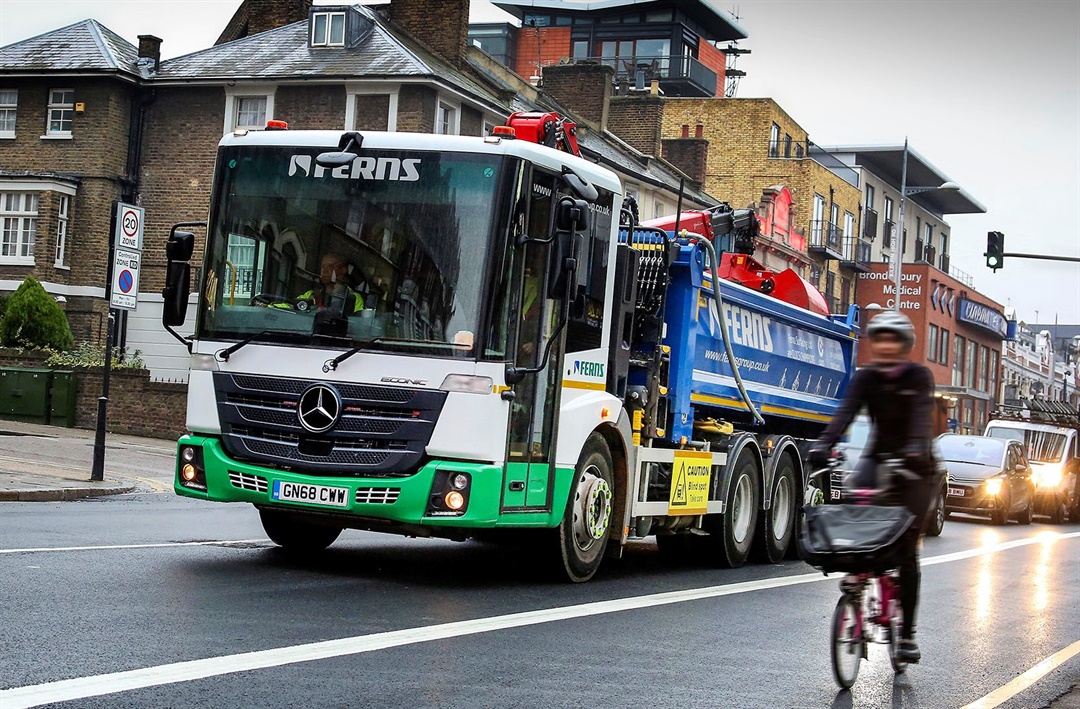 © Copyright Mercedes-Benz Trucks UK. Reproduction free for editorial use only.

Utilities contractor Ferns Surfacing is so determined to protect vulnerable road users that it has just invested in a pair of 32-tonne Mercedes-Benz Econic tipper-grabs, which are now on reinstatement and resurfacing duties in and around London.

The low-entry Econic has been awarded the maximum, five-star Direct Vision rating by Transport for London. With its deep, panoramic windscreen and full-height, glazed passenger door, the cab provides drivers with an unrivalled view, which is particularly beneficial in heavily congested areas. Drivers can make direct eye contact with cyclists, motorcyclists and pedestrians, a feature which also contributes to safety, especially at junctions.

Ferns Surfacing is part of the Ferns Group, which operates from headquarters near Maidstone, Kent, and a network of 10 depots across the South-East and East Anglia. The Group, which also has associated interests in aggregates and recycling, works primarily for gas, water and power companies.

Supplied by Dealer Sparshatts Truck & Van, the latest additions to the Ferns Surfacing fleet are the subject of a contract hire agreement with long-established partner MC Rental, also of Maidstone – Ferns sources most of its heavy trucks via the independent asset management specialist.

Both are Econic 3235L ENA models with single front steer axles, double-drive bogies and rear-steer axles, a configuration that ensures a high degree of manoeuvrability. Power is provided by fuel-efficient, 7.7-litre six-cylinder engines which produce 260kW (354 hp) and are paired with six-speed Allison automatic gearboxes. The trucks’ steel tipping bodies are by Thompson, while their Epsilon M125L cranes have clamshell buckets and offer a maximum outreach of 8.2 metres.

The Econics are based at Ferns Surfacing’s depot in Wembley, west London. Both are fitted with audible left-turn alarms, and all-round CCTV systems that assist drivers by providing images of both sides and the rear of the vehicle – footage is recorded onto a remotely accessible hard drive.

Transport Director James Gupwell explained: “A strong culture of safety runs through every part of the Ferns Group business, and these very impressive Mercedes-Benz trucks underscore our determination to adopt a proactive approach when it comes to the protection of vulnerable road users. This is an area in which our CEO Ian Fern takes a particularly keen interest, and he was instrumental in the process that led to the acquisition of our first low-entry vehicles.

“Initial impressions from colleagues who are using them have been entirely positive. Drivers have found that in congested areas the experience at the wheel is a lot less stressful as a result of the enhanced visibility. We can also send a crew of up to four, including the driver, in an Econic. They’ll climb in and out multiple times a day, and report that the truck’s low height, easy cross-cab access, and full air suspension makes the job more comfortable.”

Ferns Surfacing backfills and makes good approximately 150,000 small holes dug each year by customers such as National Grid, Thames Water and UK Power Networks, while also undertaking thousands of other reinstatements within short time scales and often in challenging environments, on both public highways and private land. While safety was the key factor behind the operator’s decision to acquire its Econics, the trucks had also to be fit for purpose.

MC Group Sales Director Dave Hutchins said: “We compared various low-entry options and liaised closely on the design with bodybuilder Thompson. The need to accommodate ancillaries such as the hydraulics tank, crane legs and the carriers for Fern’s upright ‘wacker plate’ rammers, which weigh 60 kg apiece, meant that space on the chassis was at a premium. Our conclusion, ultimately, was that in addition to its obvious safety attributes, the Econic offered more usable room between the chassis rails, and therefore represented the best overall package for our customer.”

Although the Econics are its first Mercedes-Benz trucks, the Ferns Group has commissioned a substantial number of vans with three-pointed stars since 2015. “We have been very impressed with the aftermarket support we’ve received from the manufacturer’s Dealer Network,” continued Mr Gupwell. “In terms of breakdown and recovery back-up,

Mercedes-Benz appears to provide a far better service than its competitors.”

He concluded: “We’ll be monitoring the Econics’ performance closely over the coming weeks and months to check they also offer the resilience and reliability we need, and fit into our short haul, quick turnaround workstreams as well as we hope. Assuming all goes well, though, as I’m confident it will, we’d anticipate adding up to 10 more over the next year, for our London operations.”